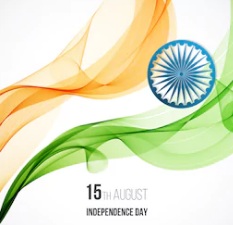 In this post, I would like to discuss with you some important questions related to Independence of India. This year , on 15 August 2018, we are going to celebrate the 72nd Independence day. It’s been long 72 years since we got Independence from Britain.

This post is dedicated to school students for their quiz competitions on Independence day celebrations. Also for the PSC aspirants.

You can watch the video of the same in my Youtube channel.

2.  What is the ratio of the length and width of the  National flag?

3. Under which article did the Supreme Court declared the right to hoist the National Flag as the Fundamental Right?

4. Where did Jawahar LalNehru raise the national flag of India on 15th August 1947?

5.  India’s national anthem was written by?

6. What is the national motto of India?

7. Which is India’s National song?

11. who was the viceroy during first war of Independence in 1857?

13. who called 1857 revolt as ” neither first nor National war of Independence?

14. who is know as Deenabandhu?

15. Who is known as Deshabandhu?

16. who was known as Christian Viceroy?

17. Who was known as Maharashtra Socrates?

18. Who was the Political Guru of Subhash Chandra Bose?

19. Who called Gandhiji as ” half naked Fakir”?

20. Who was the Political Guru of mahatma Gandhi?

22. The Civil disobedience movement began in?

23. The play ” Neel Darpan” is associated with which revolt?

24. “A flag is not only a symbol of our independence but also the freedoms of all people.” who said this?

25. who is known as Frontier Gandhi?

26. What is our National Emblem?

27. Asoka Chakra has how many spokes?

28.  Our National song was composed by?

29. Vande Matharam was taken from which novel?

30. who translated Vande Matharam in to English?

32. National Anthem was composed in which Raga?

34. Who became the first prime minister of India after independence?

35. Who led the ‘Salt March’ from Ahmedabad to Dandi?